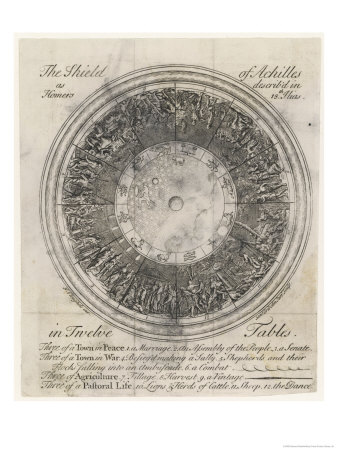 Last Tuesday’s seminar essentially covered Homer’s Iliad Books 18-20, but it also constantly referenced back to Book 16 and the death of Patroklos–which has become something of a lynch-pin for the thinking of this group of students. The main questions considered on Tuesday follow below:

1) What a world without strife look like? Achilleus suggests that he wishes strife would disappear from all the world, but would that world be a better world than, say, sort of utopia/dystopian world without emotions and strife like in Lois Lowry’s The Giver, which the students read in 8th grade, the year before my course. Later on in their careers they may consider the implications of these questions in relation to say A Wrinkle in Time, 1984, and Brave New World, and if they want a headache, perhaps even Anthem. The operant quote where Achilleus states this position comes in Book 18 in conversation with his mother after his dearest friend Patroklos has fallen to his fated death:

“Now, since I am not going back to the beloved land of my fathers, since I was no light of safety to Patroklos, nor to my other companions [is this grief for his actions?!–my add], who in their numbers went down before glorious Hektor, but sit here beside my ships, a useless weight on the good land, I who am such as no other of the bronze-armoured Achaians in battle, though there are others also better in council–why, I wish that strife would vanish away from among gods and mortals, and glass, which makes a man grow angry for all his great mind, that gall of anger that swarms like smoke inside of a man’s heart and becomes a thing sweeter to him by far than the dripping of honey.” (18.101-110, Lattimore tr.)

The students became divided, then, on the issue of what a world without strife caused by emotions would be. For here Achilleus demonstrates his usual clear-minded perception of the case: had he not become angry, his friend and many other Achaians would not have died. And he does this in language which is rather damning of himself, calling himself a “useless weight” though “no other of the bronze-armoured Achaians” are his equal in battle. The students on one side claimed that one’s humanity is directly tied to one’s capacity to feel emotion, and some suggested that one’s emotions themselves make one a human, while other more sapient students suggested that the complexity of emotion, like compassion, mixed with one’s decisions based on how to express and deal with such emotion are what makes one a human. In either case, simply restraining emotion with a pill, like in The Giver or the movie Equilibrium, would strip one of his or her essential humanity, and would essentially replace one tragedy, loss, especially of loved ones, due to one’s own emotional decisions with the greater tragedy of denaturing and neutering mankind’s essential humanity. It does seem clear that one’s mistakes are an essential part of being human, and that living with them is just as much a part of being human as trying to rectify them (as the constant examples of Herakles in the text invoke).

There was, however, also a small contingent of students who maintained that emotions do cause all strife and that because of that they ought to be expunged from all human decision. While the point has a sort of pristine edge, it lacks philosophical depth in the wake of considering humans and their essential differences from machines: if a human were meant simply to be an object with purpose which carried it out with ruthless efficiency, would not a human be somewhat poorly adapted to this purpose through its emotions and the complexities which arise due to them and their relationship to personal and societal ethics? Tragic as the consequences of strong emotions and heated decisions may be, they are as dear and essential to human nature as any sophisticated teleological point about human end. In fact, it is the fact that some humans live out their purposes, in particular Achilleus, in the wake of such emotion, which is so impressive.

2) Is the shield significant? What about the cities of war and at peace? What about the heavens in the middle and ocean along the edge? This question could be answered for days, but essentially it considers the body of text between 18.474-616. In a way, all things in life and the world are represented on this shield. In its middle are the sources of all life and that which guides it, the sun and moon and earth and sea. And around these are five constellations strewn throughout the heavens. There are then two cities, one at peace, complete with a marriage, an act of ultimate union occurring, and one at war, complete with Athene and Ares and Hate, Confusion, and Death. There are then singing and playing youths, working women, cattle, dogs, and even a dancing floor like the one “Daidolos built for Ariadnes” where young men and women, in utter elegance, are dancing in finery. Around all this, as limit to both shield and world, lies Okeanos, mighty, large, and both beginning and end to all the world and every story regarding it. Naturally, we discussed all this, but for those seeking further depth of insight, I would only say that we determined through a clever syllogism that all things must exist within the shield because even an Xbox may be perceived within it. How one asks? Well, when the students are asked what an Xbox is used for, the response is for entertainment, often by means of video games. What sorts of video games? They suggested “Call of Duty”, a game which features modern warfare–and as it features warfare, and so does the shield, so must the shield comprise the Xbox as well. Such reasoning is at best entertaining, but the point is clear that the shield does run a wide gamut of major themes, celestial, natural, human, ordered, and chaotic which form and destroy this world periodically while encompassing the lion’s share of all our human experiences.

3) A question that invoked fire-like passion was whether Patroklos died a hero, a fool, or a man in love with honor. Some students, one in particular, were of the opinion that Patroklos simply disobeyed orders and fought beyond the Achaian wall because either a) he wanted to do himself honor, or b) because Zeus had placed bravery within him/besotted his wits. A cabal of other students, however, insisted that the very reason that Patroklos fought in the first place was out of care and concern for the Achaians–because he, unlike Achilleus, could be moved to pity–especially as he had just seen the injured Machaon and Eurypylos–and been in conversation with Nestor who related the injuries of Odysseus, Agamemnon, and Diomedes to him as well.

The question of whether Patroklos died honorably/nobly was most notable for not only its spirited nature, but also for its excellent references to the text in Books 15 (the prophecy of Zeus of Sarpedon, Patroklos, and Hektor’s deaths (15.64-76) and Book 16 where Patroklos chooses, seemingly of his own volition to fight–he comes crying to Achilleus, but that when he gets beyond the ships, there Zeus’ “mind” drives him on towards his doom (16.685-689). In any case, the issue remained unresolved, though generally more from a logical rather than emotional point of view. Few if any of the students truly doubted whether Patroklos, man with three slayers, who died boasting of the looming death of his third slayer died as a hero with great honor.